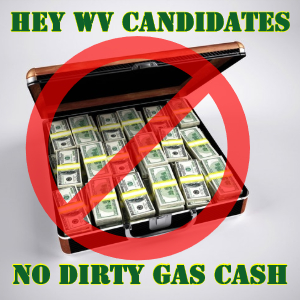 Drain the Swamp WV has published a “No Dirty Gas Cash” pledge for candidates for the West Virginia legislature.

Tell the candidates in the 2018 General Election that West Virginia voters demand political leaders whose campaigns are free from the big money influence of unconventional gas developers, and their lawyers, PACs, and lobbyists.

It is time we send a strong message to the West Virginia political class that it is time to listen to the people.

During the past legislative session, West Virginians saw the influence of dirty gas money in action– bills such as forced leasing got the fast track and passed with ease, while efforts to pay teachers and public employees their fair share stalled day after day, week after week. Attempts to fund PEIA by raising the gas severance tax were slapped down with contempt.

And in the meantime, lobbyists for out-of-state gas companies oozed out of the swamp to suggest that pro-gas legislation would magically improve teachers’ lot in West Virginia. 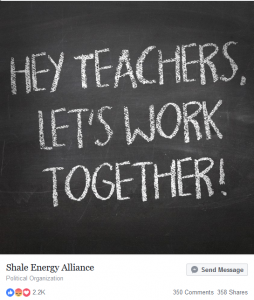 Industry spokespeople created this social media post implying forced leasing would be good for teachers. The money in the pockets of their politicians implied otherwise: whenever there was an opportunity to drastically increase funding for teachers and public employees, gas-bought politicians whittled potential gains away to nothing, or next to nothing.

But we all know better than to fall for the industry spin. We know that the only successful amendment to fund PEIA– an amendment to the forced-leasing bill which will eventually take 50% of unlocateable co-tenants’ royalties (when a property is forced into gas development) to help cover the cost of public employees’ health insurance— is fundamentally unfair. Nobody thinks that stealing from property owners is a fair or intelligent solution to PEIA’s funding troubles. Greedy gas companies, their lobbyists, and their bought out politicians know that West Virginia can double or triple our gas severance tax and still remain competitive in our region.

Meanwhile, the gas industry is rolling back the rules that protect us.  In just the last few years, the gas industry won additional exemptions from environmental protections, were exempted from Aboveground Storage Tank rules that protect us from spills like the one that contaminated drinking water in Charleston in 2014, and overturned rules to limit noise and light pollution obstructing their neighbors at drilling sites.

These big out-of-state drillers aren’t just shameless enough to buy your legislators’ loyalty. They aren’t simply looking out for number one. The gas industry and the spokespeople who serve it are getting in the way of what’s good and what’s right in our state’s governance.

We need to get that dirty gas cash out of the process.

Candidates for WV Senate and House of Delegates can show their commitment to the citizens of West Virginia by signing a pledge to refuse campaign donations from the gas industry.

“I pledge to put the interests of the people of West Virginia and the constituents of my district first, and to be free of the influence of gas industry money. I will refuse contributions in cash or in kind from gas industry executives, their lawyers, lobbyists and PACs.”

A list of all candidates who have signed the pledge is published here.

Urge your candidates– our future elected officials— to take this pledge today.